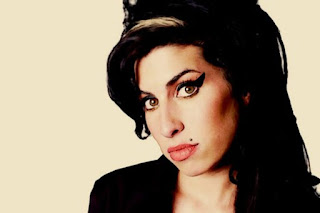 One evening, long after these facts, someone wrote me in a chat that Amy's mom, Miss Janis, is on Twitter and likes to interact with her daughter's many fans who contact her. «Why don't you send your song to her?» Again that feeling of being thrown out of time, again that "Why don't you come on over, Valerie?" It's a moment. I choose the wisest words possible, trying at all costs to safeguard the purity of my intention and of this incredible epiphany from any possible suspicion of looting and mythomania. So the most important tweet of my life so far was sent.

I don't think it has been more than five minutes. My phone vibrates. The notification is there. It says: "Angels are singing lullabies [quoting the last verse of my song]. Wonderful, thanks. Janis".

Those few words were making sense for whole months of what I had begun to think was sheer madness.

But it wasn't over.

After a few days, Miss Janis invites me to London for tea, in order to know my story.

By “fate" (now I know it was pure synchrony) I had already booked a flight to London, to celebrate the 30th birthday of my brotherly friend Alessandro, who had moved for some time to the city of the Big Ben. Everything synced up. Life was really teaching me that nothing can be forced. What has the strength to happen also has a reason to happen.

True Magic deserves to be awaited because it can repay you for a lot of work, disorientation and questions, overnight.

And that night (one of the most beautiful and unforgettable ones of my life, of course) I find myself being driven across London in the back seat of a luxurious black car, with a driver, like I was a “James Bond” of the Eternal.

As I get in front of this pub, I see Miss Janis and her partner from the window, already sitting at the table. It is a series of indescribable moments and emotions, yet I will try to give an idea. We say goodbye, I sit down and I begin to tell everything from the beginning, feeling a sense of relief growing in me, a birth, a huge energy that had to be unloaded to the ground, through my person and my story.

As I told the whole story, everything became clear: Amy wanted to go back to her mother, make her understand that her energetic essence was alive, eternal and indestructible. And she wanted the world that the same goes for everyone and everything. Again I perceived myself as a simple and unconscious channel, acted by the Spirit (or Soul, or God or Light or "Frank" or "Mary" or whatever name you prefer ...). I was sunk in a sense of the highest respect and reverence, both for the immense pain of the person in front of me, and for the concatenation of inconceivable sensations, events, synchronicities, places and people that after a long time came to open up like a wonderful flower in front of my eyes.

As we were leaving the place (after a sandwich and a beer that I have not even touched, the way my guts were twisted), Mrs. Janis and her partner ask me, very naturally, what plans I had for the next day. I feel a slight dizziness and said that I was absolutely free (of course!). They invited me again, this time at their place, to see Amy's awards (which, just to say, were the Grammy Awards, the Oscar of pop-rock music...) and to play Amy's guitar, (!!!). At that moment, again, that "why don't you come on over ... Valerie" quote resounded in me; I felt the true Magic sparkling in my whole Being and lighting up the whole of London.

The next afternoon, I would enter that house where Amy herself, through that song with my name, had been attracting me for some time now.

Only an image can convey the idea of that moment.

The living room, a photo of Amy in a frame placed on the TV cabinet (a "family" photo, not a poster or a commercial photo. I assure you that it is an incredible emotion to perceive this difference from inside the dining room of the person in the photo…. in front of her mother).

Under that photo… a copy of my album, which I had brought to Janis the night before.

My cd under her photo. Just that cd that without this episode now perhaps would still be in the realm of Ideas. The circle was complete. The Spirit had used me to shine a light in the darkness of that heartbreaking story. To testify to that family and to anyone who reads this story (also documented in the video of my song "Amy") that what we call "death" (and that human beings has always seemed to bask sadistically to dress with a cloying and unpleasant imaginary of objective correlatives and attitudes which further exacerbate the pain without in any way reflecting the actual state of reality) is simply a change of energy state.

It is a switch, through which the Energy that we are and our mind - of which we have not yet known all the devastating potential - are released from the limits of a necessarily limited perception, and open up like a fan, blossom like a rose in the inconceivable dimension of the Whole, where we manage to be in every time, in every place and next to anyone, always.

Thinking that my existence could have served to put me in a position to witness this splendid reality and to act as a bridge between a mother on Earth and a daughter in Heaven, after a tragedy like that, it's something that still gives me chills everywhere.

The disarming humanity of Mrs. Janis always accompanies me.

Every now and then I send her a short greeting message and shortly after she kindly greets me back.

Of course, for her and her lovely life companion, I am… Valerie.